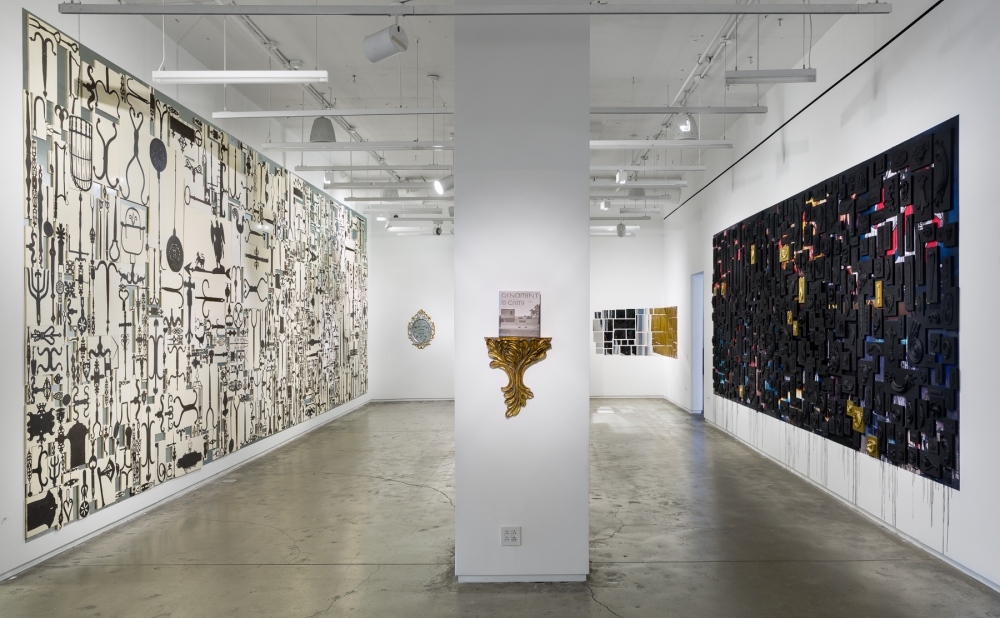 CMA is pleased to announce Ellen Harvey: Ornaments and Other Refrigerator Magnets, a solo exhibition in the Cynthia C. Wainwright Gallery that brings together a selection of Harvey’s new and recent works. Ornamentation, the action of decorating, acts as a starting point for a wide-ranging exploration of the uses, abuses and relevance of the human desire to ornament.

Through her exploration of the human inclination to decorate, embellish, and adorn our surroundings, Harvey has created an immersive installation featuring large-scale works that apply ornamentation to scenes from both city life and nature. In Ornaments for the Subway, magnetic ornaments are installed over distressed subway posters. The piece was born from Harvey’s many subway rides where she absorbed advertisements plastered around the train and then imagined what the subway would be like if it was reclaimed and beautified by ornaments. Harvey also explores the relationship between ornaments and natural forms in her piece, Two Forests, where leaf motif ornaments are inserted into a painting of a forest. Similarly, her piece Two Gardens contrasts drawings of plants by children from the Children’s Museum of the Arts’ Permanent Collection with the traditionally stylized plants used in ornamental wallpaper and other decorative schemes.

How is ornamentation different from art? Is the desire to ornament or decorate our surroundings and possessions an innate human trait? What is the relationship between ornamentation and abstraction? What does it mean when our public spaces are stripped of ornament but filled with advertising instead? Why is children’s art generally representational rather than ornamental?

Harvey is a British-born artist living and working in Brooklyn. Known primarily as a painter, she creates works that reflect on historical notions of what constitutes art, ranging from painting genres to “acceptable” art experiences. Here, acting simultaneously as artist and curator, Harvey incorporates works she has chosen from CMA’s Permanent Collection of children’s artwork into her site-specific installation to produce a dialogue about the identity of the institution based on the work represented in its collection.