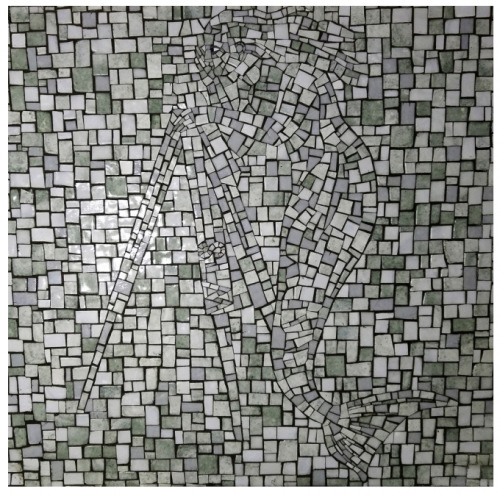 he Boston chapter of WTS International is delighted to announce the completion of NETWORK, a new 650 sq. ft. mosaic artwork by Ellen Harvey for the Headhouse 2 entrance to Boston’s South. The idea of donating an artwork to the city of Boston was originally conceived by WTS-Boston Chapter in 2005 as a way of celebrating its 25th anniversary and raising awareness of women's contributions to the transportation industry. Over thirteen years later, thanks to the generosity of numerous public and private donors, that dream has become a reality.

NETWORK celebrates the social network that is provided by WTS at the same time that it makes visible the very real transportation network that WTS’ members serve. An intricate hand-made glass mosaic map allows

travelers to locate themselves within the larger transportation network of which South Station is a major hub. The lines on the map's white background are color-coded: blue/green: water, light grey (road), medium grey (railroads), dark grey (subways. A gold dot marks the location of South Station. The dominance of the ocean is a reminder of a not-so distant past where Boston Harbor and its rivers were the primary means of transportation. We take this transformation from natural to artificial networks for granted but it is the result of human action and human decision-making. We all travel within a hidden history of engineers, architects, surveyors, builders and politicians – many of who were women, as WTS reminds us and as we too often forget. NETWORK attempts to both to show that history and to give credit to the many women who made it happen.

Careful viewers will also notice three almost invisible mermaids in the ocean portion of the map. These mermaids are not engaged in their traditional occupation of combing their hair or luring sailors to their doom, instead they are working together to survey the land in front of them. As the forces of nature personified, the mermaids provide a whimsical reminder of the dangers both of gender stereotyping and of ignoring the sea in a time of climate change. NETWORK imagines a world in which the mermaids escape their conventional destinies and instead decide to take on the land, just as perhaps now we need nature to lead our transportation decisions, rather than to be subject to them.