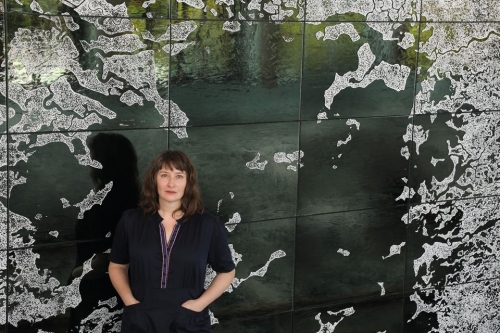 The Miami Beach Convention Center is looking sharper than ever for this year’s edition of Art Basel, thanks in part to a series of new artist commissions installed this spring and officially unveiled this week. Among them is Ellen Harvey’s monumental glass mural Atlantis—a black-and-white slice of the South Florida map, from the Everglades wilderness to the west to the ultra-developed Miami city grid on the east—located upstairs near the entrance to the new Meridians section.

Those not in Miami this week can still see a version of the work at the Aldrich Contemporary Art Museum in Ridgefield, Connecticut, where the British-American artist is currently showing the hand-drawn aluminium panels that were the basis for the permanent work, in the atmospheric group exhibition Weather Report (until 29 March 2020). That iteration is alternatively titled The Mermaid: Two Incompatible Systems Intimately Joined, because, the artist says, “it is literally a half-human, half-natural hybrid”.

The work will also travel to Margate in 2020, when the British-born, New York-based artist will have a solo show at Turner Contemporary. The Disappointed Tourist: Ellen Harvey (23 May-6 September 2020) is centred on a new project launching later this month in which the artist asks visitors to submit a place they would like to visit, but cannot, because it no longer exists or is otherwise inaccessible. “People feel these things really personally, but they need to realise it happens to everyone; they aren’t alone in their loss,” Harvey says.