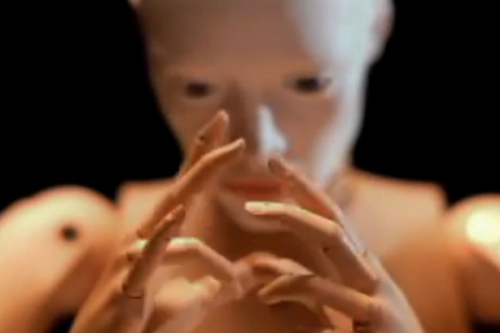 “Is that a print?” the student asked, thinking it was a 3-D printed piece.

King, a sculptor and professor in the Department of Sculpture + Extended Media in the Virginia Commonwealth University School of the Arts, was astounded that anyone could confuse a carefully crafted sculpture with a 3-D print.

The episode illuminates the generational chasm between those under 20 for whom high-tech devices such as smartphones and portable computers have always been the norm, and those over 40, who grew up with rotary phones and typewriters.

It also adds poignancy to news that King is one of 10 recipients of this year’s Anonymous Was A Woman award, a $25,000 grant for women artists over 40 who are at a critical moment in their lives or careers.

Named after a line in a Virginia Woolf book, the award was created in 1996 in response to the decision of the National Endowment of the Arts to stop supporting individual artists. Little else is known of the award.

“It’s really interesting how anonymously it was constructed,” King said. “What’s extraordinary is that you don’t know who nominates you, who vets the application, where the money comes from and who makes the final decision.

“All of this is both terrifying and magical.”

What King does know is that the timing is serendipitous.

“The grant really comes at a rescuing time for me,” said King, who has been working on two long-term projects — a solo show of portrait heads spanning from the past 30 years, and a book she is co-writing with a colleague from the Smithsonian on a 16th century automaton.

When King first heard of this grant, she was blown away with gratitude that somewhere a group of people realized that, in many fields, women still do not have the same opportunities as men.

“I know many women who are struggling to accomplish their work, pay their bills, raise their families,” she said. “It's a beautiful grant. It's really kind of a visionary grant — even a political one — that I feel especially, especially proud and thrilled to be found eligible for.”

King, who joined VCU in 1985, is the longest-serving faculty member in the sculpture department — the largest undergraduate sculpture program in the United States. A former Guggenheim fellow, she has work in the permanent collections at the Hirshhorn Museum, the Virginia Museum of Fine Arts, the Los Angeles County Museum of Art, the Museum of Fine Arts in Houston and the Metropolitan Museum of Art in New York.

King is known for combining precisely movable sculptures of the human form with stop-frame animation in works that blur the perceptual boundary between actual and virtual object. Her work reflects her interests in early clockwork automata and the history of the mannequin and puppet.

The human figure captivated King from a young age. Her mother had polio and their home was full of prosthetic devices. She found the meld between human and mechanical exquisite.

“Even now, a stranger raises his hand on a bus and I still find this simple gesture a miracle of will and autonomy,” she said. “Working in clay, wood, wax or bronze, I follow the form of the human body, but at half life-size. At the same time I engineer an anatomy of poseable joints, using the lathe and mill. Carving a hand, then cutting it up and inserting joints: How much machinery before I lose the emotional coherence of the image? It's a fight between ghost and machine, the source of my best problems in the studio.”

King began to incorporate animation into her works in 1991, before the age of the personal computer, delving into using film and sculpture in a microtheatrical setting. With the help of some “marvelous” animators at Colossal Pictures, a venerable production studio in San Francisco, she was able to animate her sculpture using stop-frame technology. Shooting for eight hours yielded about five to 10 seconds of animation. It took weeks to generate a couple of minutes of film.

While advances in technology may speed up the filming process, nothing can hasten the time it takes to  craft a sculpture by hand. For instance, the video animation of King’s work at the Hirshhorn, “Pupil,” took about three weeks to make; the actual sculpture took three years.

Back in King’s studio, displays include “Bartlett’s Hand” — a combination of a sculpture and stop-frame animation of that sculpture, presented in a way that make them look as closely alike as possible. Her films are all driven by computers so they can have the highest resolution. As good as HD-DVDs and Blu-ray Discs are, they still don’t cut it. So King plays the largest gigabyte files of the animation on computers to get the crispest, most authentic look.

Also on display: an early piece from grad school, a one-man theater where the viewer sits and closes the two halves of the theater around his head. Music plays and after 45 seconds a door opens and a puppet confronts the viewer eye to eye.

Cabinets are filled with early sculptures, a figure study, an articulated cast bronze torso with movable parts (which the student thought was printed from a 3-D scan), designs for movable arms, and glass eyes collected for decades from flea markets, doll hospitals and taxidermists.

Some of those eyes will make their way into her upcoming shows. The solo show in New York in 2015 — which the Anonymous award is helping her finish — will comprise nine small portrait heads on traditional pedestals. It’s an unusual show for King, whose works in the past 20 years have included film animation. The exhibition will include portrait heads from across 30 years of work, including one she is completing now. She’s also preparing for a show in 2017 that will include animations, projections and video.

The other project she now has time to finish is “A Machine, a Ghost, and a Prayer: The Story of a Sixteenth-Century Mechanical Monk,” which she has been working on for 10 years with W. David Todd, emeritus conservator of timekeeping at the Smithsonian Institution.

It’s both a history and art lesson shrouded by a mystery: What is the story behind the mechanical monk delivered to the Smithsonian in the 1970s? Made in the 1560s, the figure’s iron clockwork still works, allowing him to walk, pound his breast and raise his rosary and cross.

“The complexity of the mechanism is pretty stunning,” King said. “It’s a watershed moment for such an object in the history of religion and politics.”

In “A Machine, a Ghost, and a Prayer,” King will ponder how and why the device was made and how it was viewed.

Now that she has the opportunity to finish both products, King hopes she is on the cusp of two milestone career accomplishments.

“To concentrate on both,” she said, “I've kept major commitments outside of my teaching job to a minimum. These have become my highest creative priorities. Support from Anonymous Was A Woman [gives] me time to work, by funding part of a research leave from teaching.”